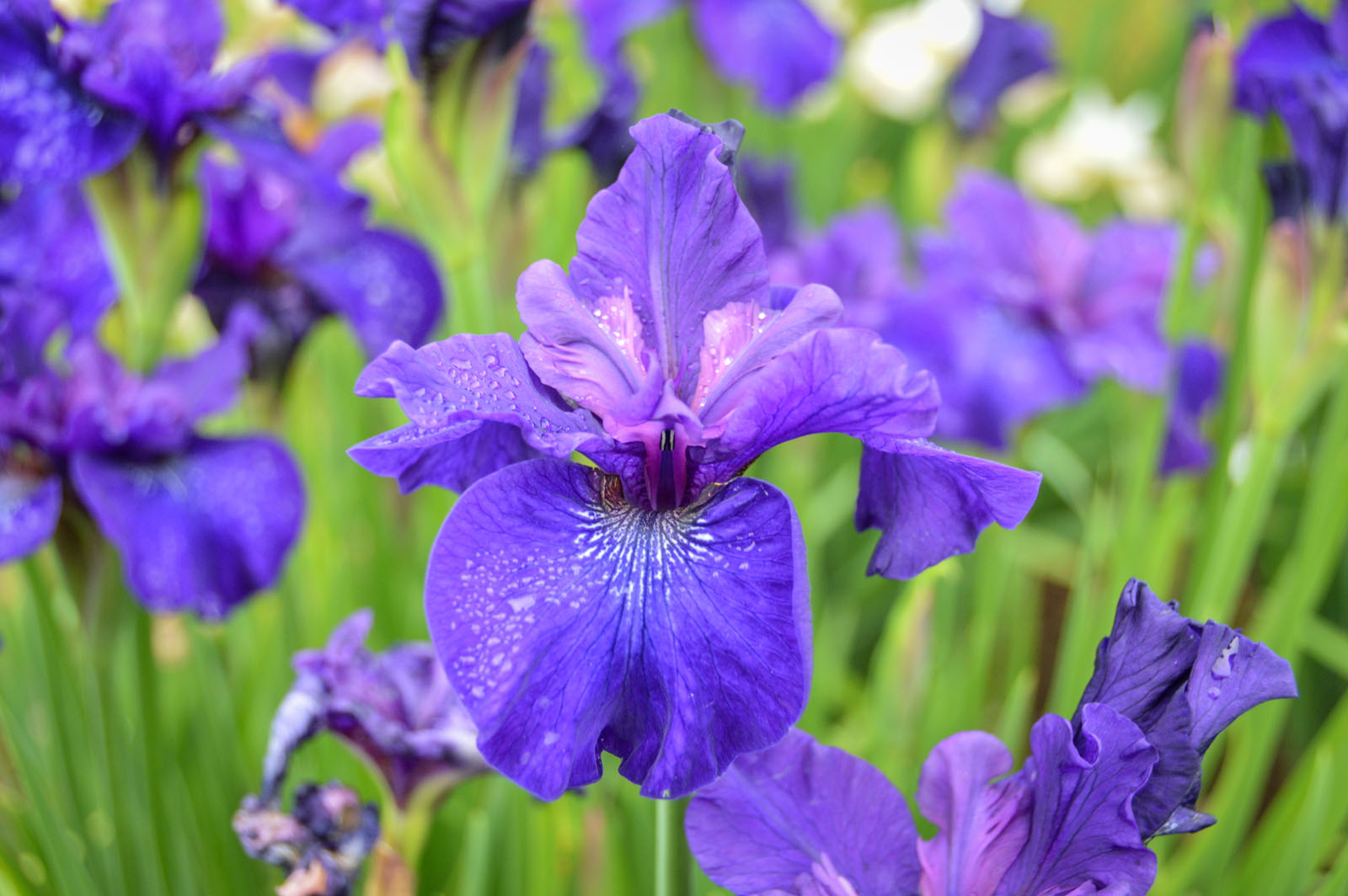 Each year AIS accredited judges vote for a variety of awards for irises. Currently, official garden awards for the American Iris Society have been established for the following 15 classifications of irises:

Full information on the various medal and award winners from recent years are provided in the annual listings below.

Summary of medals and awards given by the American Iris Society:

Dykes Memorial Medal: First awarded in 1927, the Dykes Medal is the highest award of the AIS. Awarded to no more than one iris per year. Irises are eligible as a Dykes Medal candidate for three years following the winning of a classification medal. Only AIS registered judges may vote.

*Note: History info+winners list for each medal are a continual work in progress. All of the medal histories are in place below, balance of information updates follow ASAP as time allows and when the annual new medal winners listings are collected/supplied/made available. (CH November 2012)

Award of Merit (AM) awards are given to irises from each classification each year. Any iris is eligible the second year after previously winning an Honorable Mention (HM). Only AIS registered judges may vote.

High Commendation (HC) awards are reserved for seedling irises, viewed in the garden by AIS judges, under seedling number or registered name, which have not been introduced into commerce yet. Any seedling of any established classification that receives five votes is granted an HC award. Only AIS registered judges may vote.

There are also a number of popularity awards. These awards are primarily voted on by AIS members (not necessarily AIS judges) at the annual AIS Convention. These awards include the President’s Cup, the Franklin Cook Memorial Cup, and the Ben R. Hager Cup. Every year at the AIS national convention, registered attendees (regardless of whether they are members of AIS) vote for irises to determine these awards. Additionally there is the Fred and Barbara Walther Cup determined by the AIS Awards Honorable Mention (HM) award balloting (AIS Judges only). The Lloyd Zurbrigg-Clarence Mahan Seedling Cup is provided for the best seedling viewed at the annual AIS Convention, voted by convention attendees.

Eligibility is restricted to introduced irises originated within the host AIS Region for that year’s national convention or originated by a hybridizer whose garden is included on the convention’s official garden tour, regardless of its location. Irises must have been seen growing and in bloom in the convention’s official tour gardens, but need not be official guest irises. Each registrant may vote for one variety and the President’s Cup is awarded to the iris with the largest number of votes.

All introduced irises seen growing and in bloom in the official tour gardens of the convention are eligible for consideration for the Franklin Cook Memorial Cup, except irises originated within the host AIS Region for that year’s national convention by a hybridizer whose garden is included on the official garden tour, regardless of its location. The irises considered need not be official convention guest irises. Each registrant may vote for only one variety and the Franklin Cook Memorial Cup is awarded to the iris receiving the greatest number of votes.

All introduced median irises (SDB, IB, MTB and BB) seen growing and in bloom in the official tour gardens of the convention are eligible. Irises considered need not be official convention guest irises. Each registrant may vote for one median iris variety and the Ben R. Hager Cup is awarded to the median iris receiving the largest number of votes.

The award is named for Ben Hager of California who was one of the premier hybridizers in the American Iris Society and had the distinction of winning the top awards in every category that was possible at the time. Ben Hager was known primarily as a hybridizer of bearded irises, but worked with many of the different iris categories. Most iris growers identify him with his famous award-winning pinks, VANITY and BEVERLY SILLS, which make the tall bearded popularity poll each year. The winners of the Ben R. Hager Cup are shown below:

Fred and Barbara Walther Cup
Awarded annually by The American Iris Society to the originator of the iris variety that received the greatest number of votes in the Honorable Mention (HM) award balloting, regardless of classification. All classifications of irises are eligible. Only AIS registered judges may vote for this award.

This award is provided for the best iris seedling viewed at the annual AIS Convention, voted by attendees. Presented by AIS Region 4 in honor of two of its distinguished members; Lloyd Zurbrigg, a noted hybridizer of reblooming irises and Clarence Mahan, a hybridizer and a past president of the AIS. It was first awarded in 2014 at the Dallas, Texas AIS Convention. Notably different from other AIS awards, the recipent retains the award as a new award cup is donated each year.

The purpose of posting the proposed AIS Awards Ballot online is to give people (AIS judges and hybridizers) the chance to review the listing and provide input before the official AIS Awards Ballot is finalized and sent out for voting.

This ballot may not be used for official voting. Only the final version of the Official AIS Awards Ballot provided to the AIS Judges may be used for voting. See instructions below.

INSTRUCTIONS
Failure to vote the Official Ballot in a timely manner for two consecutive years results in automatic
disqualification as an AIS judge. If for any reason it is not possible for you to vote this year, state so on the ballot and return the ballot by the deadline to the Awards Chair: Gerald C. Snyder, 225 Sky Line Dr., Sedona, AZ 86336

ONLINE VOTING INSTRUCTIONS:
Detailed instructions will be on the voting website at www.voteirises.org by May 1. If
you voted online last year or submitted an e-mail address on your paper ballot, an e-mail will be sent to that address when the system is available. Please go to the website and give it a try. We are available for you, if help is needed, but the system is easy and error-free! You may enter the voting system multiple times, tweaking votes or completing different sections. You may even have a copy of your votes emailed to you!

PAPER BALLOT INSTRUCTIONS:
1. The ballot must be postmarked no later than August 1, 2017, to be counted. If it is postmarked by August 1 but received after August 10 the votes will not count, but you will receive credit for having voted. There is no special deadline for Japanese irises.
2. You must provide your name, address, e-mail, and region. Please sign and date.
3. Mark your ballot clearly by either of two methods: use a contrasting color (blue, red, green, purple) ink pen and place an X clearly beside the name of the iris or use a Highlighter to highlight the iris name. Do not use a pencil! Make your votes obvious and easy to find!
4. Enter the total number of votes cast in a category in the BOX beside the name of the category. Do not exceed the total number of votes allowed in each category, which is indicated in each section. If you exceed this number, your votes in that section will not be counted. You may always vote for fewer than the maximum and skip a category with which you are unfamiliar or do not have an opinion.
5. If you choose to skip a category, please put a 0 in the box.
6. Add correct postage to the pre-addressed return envelope. Postmark by deadline!
The award winners will be posted on the AIS website, www.irises.org , as soon as tabulation is
completed, and published in the October Bulletin.

All AIS accredited Judges are required to vote the Ballot. Only accredited judges may vote the ballot. The Judges are evaluating the performance of those irises seen growing in the GARDEN, not in shows or photos. 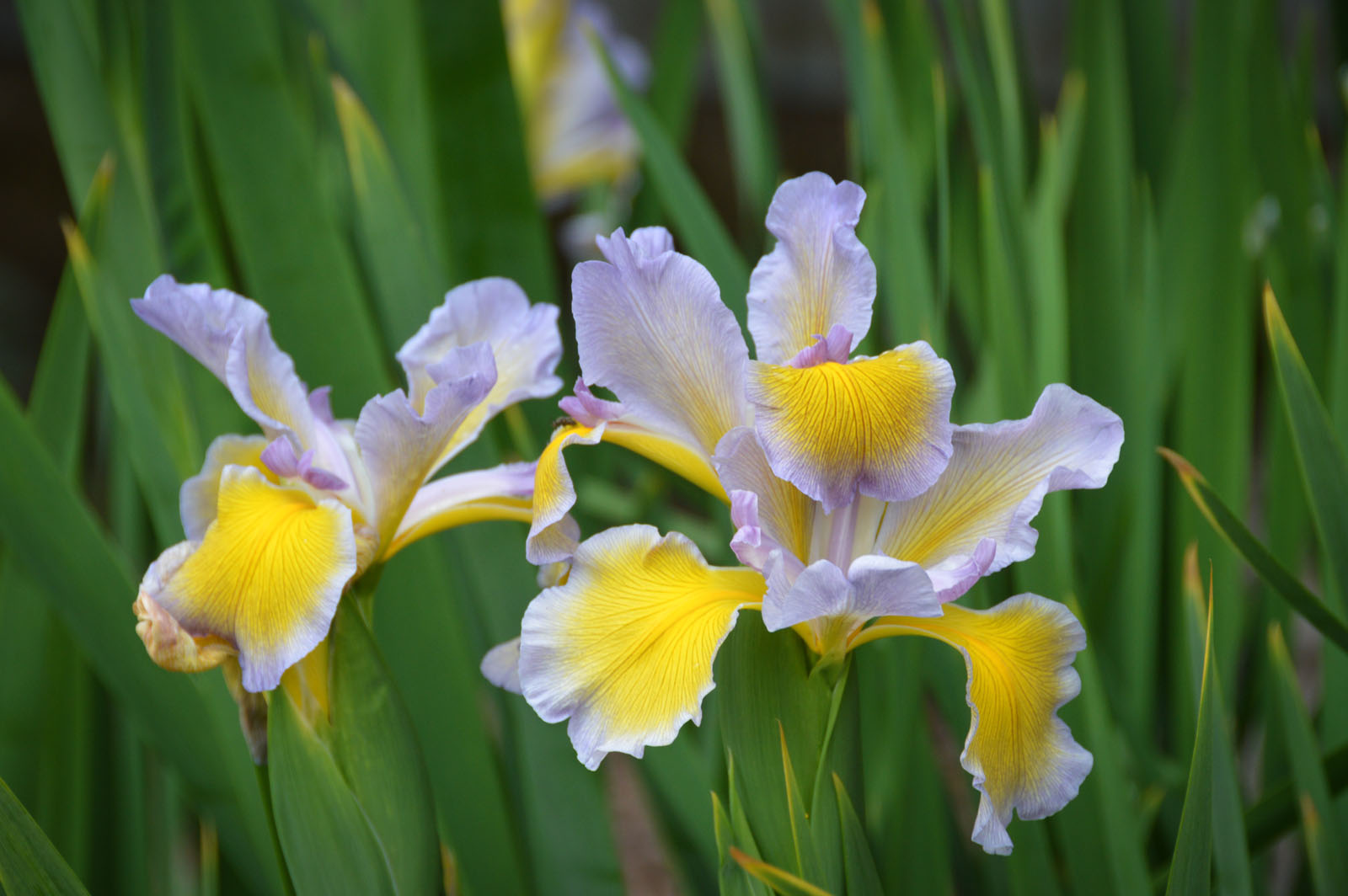 The symposium is an annual popularity poll of Tall Bearded (TB) iris conducted by the AIS. All AIS members may vote in this symposium. The top 100 Tall Bearded iris are then ranked and the results of the symposium each year are published in the official publication of the AIS, the AIS Bulletin, usually within the January issue. All AIS members receive this quarterly publication as part of their AIS membership. For detailed information on AIS membership please go to the AIS Membership area of the website. The full Symposia results are also published here on the AIS website.

The 2019 edition of the TB Symposium ballot is now available, you may proceed to place your votes until the deadlines detailed in the instructions below. The list of iris eligible for the Tall Bearded Symposium is only available online.
The list is available here as a downloadable PDF file which you may review and print if required. (please follow the link below the voting instructions)

Every member of The American Iris Society may participate in this balloting of the irises listed on the following pages. Each member is allowed twenty-five (25) votes. Please follow the instructions below:

1. Voting may be accomplished in a variety of ways:
a. You may mail your RVP a list of the iris you are voting for, either names and numbers, or just numbers.
b. You can download the list from the AIS web site (www.irises.org), print it, mark it up, and mail it. (see the link to the ballot below)
c. Most RVP’s have email, and those who do will accept any of the above formats that way, too.
2. No member may vote for more than twenty-five varieties. You may vote for fewer than twenty-five if you wish. Write-in votes are not allowed and will not be tabulated.
3. Your ballot must be mailed to and received by your Regional Vice President by
September 1, 2016 in order to be counted. The name of your RVP is listed inside each AIS Bulletin. Sign your ballot and mail it first class.
4. Overseas Members may vote by mailing their ballot to the Symposium Committee Chairman whose name, email, and address appear inside each AIS Bulletin. It is advisable to send by Air Mail to assure receipt of your Ballot by September 30, 2016. Ballots received later will be counted if at all possible, so please vote even if you can not meet that date. Email is an acceptable alternative (either numbers-only, or numbers and names), and a representative in each foreign country can tally that country’s votes and send the totals and voters to the Symposium Chair by email or mail.

Follow this link to the AIS_2019_Symposium_Ballot (Adobe PDF file)

Results of the AIS Tall Bearded Symposia 2007 on:


The results provided here are for your reference use and enjoyment.

Follow the links below to the detail results of recent AIS Tall Bearded Symposiums:

Most, if not all, of these irises are available to purchase through the commercial vendors listed in the Commercial Directory Listing area of the AIS website. They are not likely to be available from your local garden center.